1. Description of the RedPhone-OS station

The surface station for voice underwater acoustic communication RedPhone-OS (hereinafter referred to as the station) is intended for wireless transmission of voice messages from an overhead control point for diving descents to divers and receiving voice messages from divers equipped with wearable diving telephony devices that support signal parameters common with the station.

The general view of the station RedPhone-OS, with the connected transducer and microphone, is shown in Figure 1.

The device is made in the form of a shockproof plastic device case, which, with the lid closed, provides protection class IP67. The built-in power supply made of LiFePO4 batteries that operate at low temperatures and provide more than 1000 charge-discharge cycles.

The dashboard of the device is made of high-quality stainless steel, on which, using laser engraving, are applied informational inscriptions. Figure 2 shows the location of the controls and connectors.

The station uses single-band amplitude modulation (SSB, Single side band) and supports the bands most commonly used in such systems, which ensures compatibility with almost all analogues.

Table 1 - Correspondence of the channel number and signal parameters

General technical characteristics of the device are given in table 2:

1.4. Contents of the standard delivery set

This paragraph describes the standard delivery set (see table 3). By an additional agreement with the manufacturer, it is possible to supply a transducer with an extended cable.

2. Work with the device

It is carried out with the station cover open. During this check, it is controlled that:

It is carried out after a successful visual inspection, according to p. 2.2.1.

During the inspection, it is controlled that:

2.2.3. Checking the transducer and microphone

During the inspection, it is controlled that:

To check the operability of the headphones, the toggle switch “Speaker” must be in the state “Off” and all sound signals, including the background noise, should be controlled using the headphones according to the method described above. 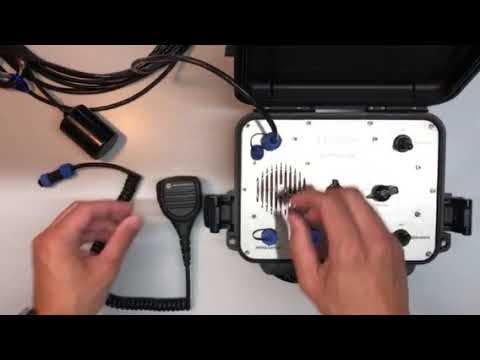 2.3. Working with the station

Before work, all preparations and checks provided in p. 2.2.

The underwater telephone works in half-duplex mode: transmission and reception alternate; if the device is in transmission mode, it cannot receive incoming messages.

To receive voice messages from divers, the PTT button on the microphone must be released. In this case, incoming messages will be played by the device’s speaker (or headphones, if the latter are connected and the toggle switch “Speaker” is in the state “Off”).

The volume of reproduced incoming voice messages depends on the slant range between the antenna station and the diver, as well as on hydrological conditions. It may decrease when a diver enters the acoustic shadow zone (when elements of the underwater landscape, parts of structures, ships, algae, etc. are on the signal path).

The user must independently set a comfortable volume level using the Volume control depending on the current communication conditions.

To send voice messages, the following sequence of actions is performed:

Upon completion of the work, the actions should be performed in the following sequence:

The station and the complete equipment: transducer, microphone and charger do not have special storage conditions, except for the following:

The charge of the station’s built-in power supply is allowed only with the original charger when the station is off (toggle switch “Power” in position “Off”) and all other connectors are disconnected. Before using the charger, you must read the operating instructions for the charger.

The manufacturer’s warranty applies only to factory defects that were discovered during the operation of the device in accordance with this manual during the warranty period (2 years from the date of purchase).

The manufacturer guarantees free repair or replacement of faulty equipment from the delivery set that has failed due to a factory defect.

The reasons for refusing free warranty service, free repair and replacement include:

4.2 Disclaimer of the manufacturer

ANY OF THE PARTS OF THE DELIVERY SET ACCORDING TO par. 1.4. SEPARATELY AND IN THE COMPOSITION OF THE SYSTEM, NAME FURTHER “DELIVERED EQUIPMENT”: